To quote J. R. R. Tolkien, “not all who wander are lost” – and, that’s our feeling today after wandering on Pinterest.

Indeed, we found there a small jewel: i.e. a mobile DIY which looks a lot like one of Dominique Maes’ illustrations that can be found in our kids app ‬ “All my Love (for You)”.

So, we’re having this huge illustration of an aerodrome with this small guy at the edge of the runway waiting for further iOS development… and we suddenly think that we don’t know much about aircraft ground handling and the job of the landing signal officer (LSO)!

We’ve started looking into aircraft marshaling and the job of the flagman; and, this is what we found in substance:

“visual signalling between ground personnel and pilots on an airport, aircraft carrier or helipad. Marshalling is one-on-one visual communication and a part of aircraft ground handling. It may be as an alternative to, or additional to, radio communications between the aircraft and air traffic control, The usual equipment of a marshaller is a reflecting safety vest, a helmet with acoustic earmuffs, and gloves or marshalling wands, handheld illuminated beacons.”
Source: Courtesy of Wikipedia

Now, the question is “What and who’s going to land on this airport runway???”

We’re quite excited about this new addition in the app and look forward to sharing it with you! 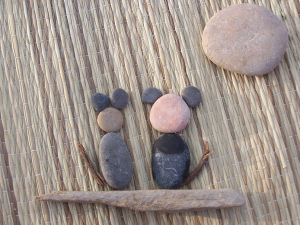 “What do you say? Is it a little too much? You want to rest?
Then, I suggest that you sit here a little while. Leaning against me.
And if you want, just before you go to sleep, we can read this curious little book again.”

All my Love (for You), Dominique Maes
https://itunes.apple.com/be/app/cotcotcot-apps.com-presents/id555307873?mt=8